I met Casey during my first few weeks as a college freshman at Northern Arizona University. He is the type of best friend that you can call at a moments notice to go on any adventure. Casey and I are big rodeo fans, and have been to our fair share of rodeos together. Nearly a year ago we were en route to some adventurous location when Casey mentioned that he had always wanted to ride a bull. It was close to the time of the Prescott Rodeo, and he thought that maybe he would enter in that bull riding event. As the daughter of a long time bull rider, I am aware that the stock used at this rodeo is among the best in the nation, perhaps the world. Read: dangerous. I told him that there was no way I would sit by and let him do this for his first ride. I promised that I would look into finding a “gentler” first bull.

Not too long ago, I connected with a half-brother, Josh, that I had spent most of my life not knowing. Having been a PBR bull rider himself, we instantly bonded over our love of rodeo, among other things. During one of our first conversations, he mentioned that one of his cousins owned a bull company in town (K4 Bucking Bulls). Thinking back to my conversation with Casey, I couldn’t help but ask if there would be a possibility of getting Casey on his first bull.

Josh got Casey set up with gear and tips.

Getting a little nervous.

And then it was time…

Sadly, Zorro the bull got the best of him, but he lasted almost 6 seconds! 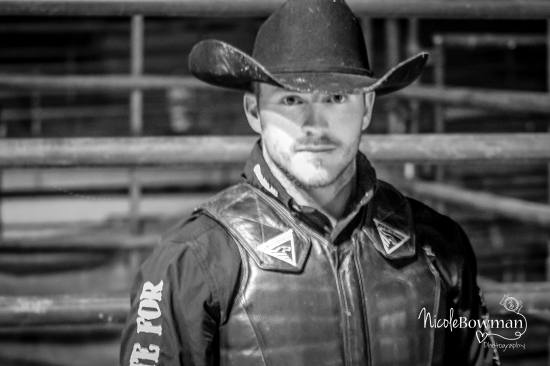 Thanks to my big brother for getting this all set up, and to everyone who came out last night to cheer Casey on! Thanks to K4 Bucking Bulls and Hogs N Horses for such a great time!